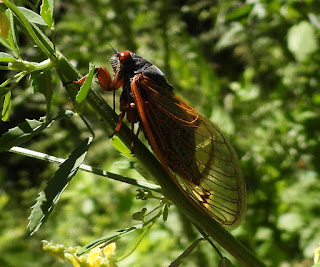 Hello, everyone,
This year's emergence: This emergence of Brood X periodical cicada has now pretty much run its course – the adult stage anyway. If you have young fruit trees, it might be helpful to prune off damaged branches – this would prevent the nymphs from establishing on roots, helpful in the first formative years of the tree. Eggs normally hatch 6-10 weeks after oviposition. For us in Virginia, this was mainly a northern Virginia issue. Brood X extends up through eastern Pennsylvania and New Jersey (remember this when you get to the hot topic note toward the end!) There were also populations of Brood X south of Virginia (parts of North Carolina, Tennessee and Georgia). Here are the maps for Broods IX and X: 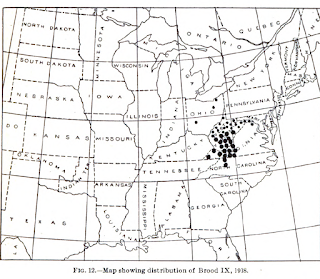 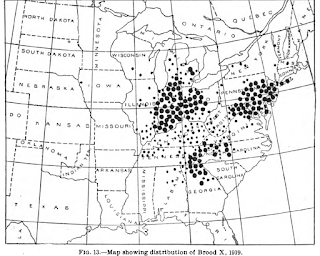 The broods were characterized and named by the USDA entomologist Charles Marlatt in 1907 (Marlatt 1907). But while Marlatt made a great formal study of these insects and determined the geographical broods, he was not the first to determine the 17-year cycle. A free African-American naturalist, Benjamin Banneker, living in Maryland, born in 1731, reported this after an 1800 emergence (Barber and Nkwanta 2014). He successfully predicted subsequent emergences. Both of these individuals played other important roles – Banneker helped survey the borders of Washington DC, and Marlatt led the creation of the first regulations designed to protect us from invasive pests).

There are three Magicicada species that make up each brood of periodical cicada. The local species composition can very a lot, even within a county. Last week we sampled cicadas in Frederick County: at Fort Collier in Winchester, 94% were composed of M. cassini (34:2), while at Star Tannery in the southwestern part of the county, 76% were M. septendecim (16:5). M. cassini are smaller, with the underside of the abdomen completely black, compared with the larger M. septendecim, with red on each sclerite. 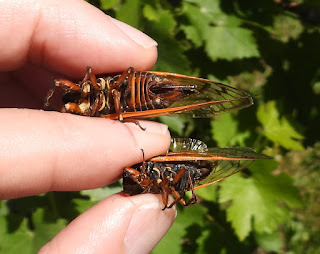 While M. cassini may lay their eggs in smaller branches, I’ve seen no comparison of the economic impact of the species, and they are treated equivalently.

It was originally thought that most egg-laying occurred distal to the clusters of grapevines, and so on grape, injury was most important on young vines. Clearly some of the injury we saw was basal to clusters, and those clusters will be lost. While young vines are at particular risk, there is clear economic impact to bearing vines. At this point, it is not recommended to prune out affected shoots, but rather wait until winter pruning. 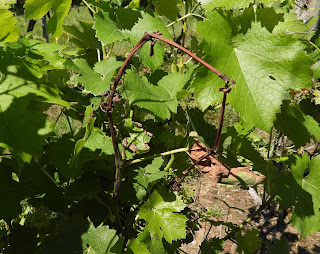 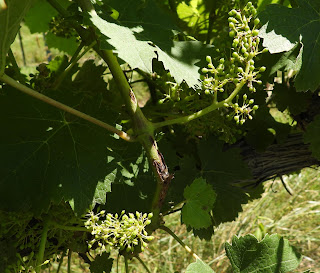 Fig. 3. Egg nests of periodical cicada may occur either above or below grape clusters.

Coming attractions: The adults of this emergence of Brood X are now a recent memory. As I’ve pointed out in extension presentations, it is wise to avoid planting a new orchard or vineyard a year or two before an anticipated emergence. However, we don’t usually give this warning long enough in advance for sufficient planning, given the lead time needed by nurseries, to get desired scion/rootstock combinations. Here is a listing in order of appearance of broods relevant to Virginia. The most important ones will likely be XIX, II, IX and X. Click on the Brood numbers to see a map.

Addressing a hot topic: Another issue has been broached in the news in the past few days that I would like to comment on. There has been a recent wave of unexplained bird deaths and illness in northern Virginia. Symptoms include blindness or crusty eyes, and neurological problems. The idea was postulated that eating cicadas was responsible for this bird morbidity/mortality. This is circumstantial at best. There were no such problems noted last year in Brood IX in southwest Virginia, nor in earlier emergences of Brood X in northern Virginia.

There is an entomopathogenic fungus, Massospora, that may provide some natural mortality to periodical cicadas. There are compounds in Massospora that are psychoactive in cicadas, causing them to change their behavior (Boyce et al. 2019). One compound in Massospora, cathinone (Boyce et al. 2019), has been known to have psychoactive properties in humans (Langman and Jannetto 2020). But there is no record of eating Massospora-infected cicadas being harmful to birds. Moreover, Massospora is a natural component of the system, and unusual bird maladies are not reported following cicada emergences.

One interview (linked above) speculated whether birds might be picking up insecticides or heavy metals from sprayed cicadas. In an earlier study (Clark 1992), cicadas were not found to be a source of significant levels of organochlorine insecticides or heavy metals for birds. Organochlorines have been replaced by other classes of chemistry, but that group was longer lived, and would bioaccumulate. Modern insecticides should pose less of a hazard in this regard.

So in summary, here are my thoughts on cicada involvement with the bird death/sickness syndrome. If the situation changes, or new information becomes available I’ll let you know:

• There was no issue with bird mortality/morbidity with last year's brood IX, nor northern Virginia Brood X last time.
• Massospora has been a part of the landscape for a long time, with no apparent link to birds.
• There was no apparent bird problem in PA or NJ, nor Tennessee or North Carolina, where Brood X was abundant. Note: Some increasing bird mortality was seen in southern NJ after cicadas had disappeared, well after the outbreak in northern Virginia. This weakens the case for synchrony between cicadas and bird deaths.
• There have been changes in pesticides used over the years, but from last year in Brood IX, there wouldn't be any difference with this year in Brood X.
• If cicadas, fungus, or pesticides are involved, there must be some other environmental change to shift their importance.

Reporting Bird Mortality: The Department of Wildlife Resources has created a reporting form for cases of sick or dead birds:

Hello, everyone, Just a note on something many of you are aware of - periodical cicadas are now actively laying eggs in grapevines in northern Virginia vineyards. Mature vines have been attractive as well as young vines. Adults are normally active for about 6 weeks. The first report of adults emerging from soil was on April 28, but this was quickly followed by a period of cool temperatures, greatly slowing cicada development. Just a few words on effective materials. Pyrethroids like Danitol and Baythroid are among the most effective materials. Assail, Sevin and Surround also have activity - some materials that are somewhat less effective have the benefit of less risk of inducing secondary pest outbreaks - especially mealybugs and mites. If you opt to use pyrethroids pay close attention to secondary pests for the subsequent weeks. More later, Doug
at June 10, 2021 1 comment:

See Asian Giant Hornet Fact Guide by James Mason in Virginia Tech’s Department of Entomology for a summary of risk, and an excellent pairi... 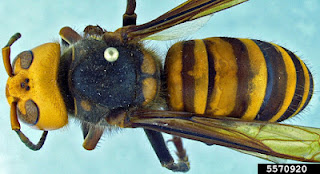